Helen Cash Jackson, a pioneer advocate for multi-cultural NY arts funding and recognition. Mrs. Jackson joined the ancestors on Wednesday May 27th, after a long battle with cancer. Her home going ceremony in Harlem was attended by her colleagues and friends including Smokey Robinson, Dionne Warwick and Valerie Simpson of Ashford and Simpson.

Rainbows of monuments to Helen Cash Jackson’s impact, speckle the New York arts landscape and continue to influence what grows possible on global stages. With the stalwart elegance of a seasoned diplomat, Helen Cash Jackson carved out a revolution for arts of color and unique vision. Helen Cash Jackson’s powerful presence and nurturing precision could overwhelm the novice.  Yet, as Woodie King Jr., theater director and producer of The New Federal Theatre, said of Jackson, “She understood and cared for us.”  (NY Amsterdam News June 6. 2013)

Rising through the ranks during the US Civil Rights Era, when the number of Black luminaries in the arts, politics or education was small yet mighty, her vision for a new future formed.  Helen Cash Jackson surely joined the midnight banters of leaders like Sidney Poitier, Harry Belafonte, Earl Graves, Shirley Dubois, Barbara and Vernon Jordan, Ossie Davis, Ruby Dee, Douglas Turner Ward.  It was a time when black luminaries knew one another and shared wisdom. Wisdom springing from a palpable life-and-death need to change the landscape of repression to multi-cultural

A passionate arts activist, Mrs. Jackson  is best known as the director of NYSCA’s Special Arts Services and leader on NYSCA‘s Multi-Arts Committee. As part of the first arts council in the country, she established the Special Arts Services (SAS) program to recognize the contributions of groups of color in their neighborhoods.

Helen worked relentlessly as reminder to  NYSCA‘s Special Arts Services Program Special Arts Services Program of its mandate to help build and sustain large and small institutions spanning all arts disciplines and ethnicities across New York State. Her memory is honored when this mandate is grasped and held tightly. Sure, the ever-present temptation to give resources to those assumed stronger exists. However, brick and mortar assets are not enough to proud those who lack the knowledge to represent specific groups better than they can themselves.

Helen Cash Jackson was a pioneer, who set high standards for New York theatrical organizations, like

SAS launched in the late 1960s as did The Negro Ensemble Company.  Facing dogged opposition inherent in established, often exclusive,

practices in the arts and government arts funding. The challenges her sister Rosalind Cash ‘s life as a gifted black actor and of her husband Chuck Jackson(singer Any Day Now) fueled the fire of her convictions. Oddly, Rosalind passed in 1995 from the same ailment, cancer; perhaps the grief and adventure of fighting  for future generations. Notions of invisibility expressed in the writings of Ralph Ellison and James Baldwin, eventually disappeared into beginnings of dignity and on-going self-expression on stage and screen for people of color.

Her sister, Rosalind Cash was a Negro Ensemble Company founding member. These sisters worked before and behind the scenes to manifest  what Douglas Turner Ward called:

“..a theater evolving not out of negative need but positive potential, better equipped to employ existing talents and spur the development of future ones..-no less high than any other comparable theater company of present or past world fame”..infusing life into the moribund corpus of American theater.”

She grew up in Atlantic City to parents who demanded the most from Helen, her sister and her 2 brothers. She and her sisters and brothers won excelled and won awards in highschool, though the 1940’s didnot afford these beautiful women the opportunity to compete for the Miss America Contest held every year in their home town, nor were the boys able to compete for participation among  the Mummers in the annual parade celebrated nationally from Atlantic City (location of TV’s Boardwalk Empire series). On this backdrop she was more than prepared for the job of including of black and brown people in the arts..

Rosalind Cash, her older sister was a founding member of The Negro Ensemble Company and  achieved Emmy Award winning status for her role in the PBS drama Go Tell It on The Mountain by James Baldwin. Her late brother, Colonel John A. Cash was a military historian.  Jackson was born on Nov. 5, 1942, in Atlantic City, N.J., to the late Martha and Jack Cash. After graduating from Atlantic City High School, Helen joined her brothers John Anthony and Robert and sister Rosalind in New York City.

Any Day Now by Chuck Jackson

Any day now I will hear you say “Goodbye, my love”

And you’ll be on your way

Then my wild beautiful bird, you will have flown, oh

Any day now, when your restless eyes meet someone new

Oh, to my sad surprise

Then the blue shadows will fall all over town, oh 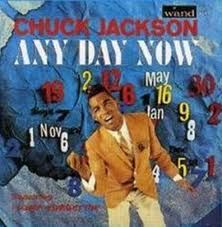 Any day now love will let me down, whoa-oa-oa-oa-oa

Oh my wild beautiful bird, you will have flown, oh

Any day now I’ll be all alone