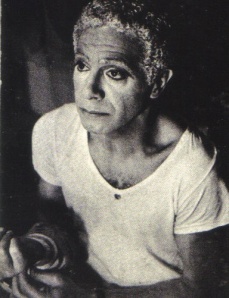 “…The shac-shac and the violin

Mix with the smoke and malcochom

They say “Sing how Chantal the brute

And what I tell them is the truth

Don’t believe all you heard or read

Like the staining of clear springs the mind of man,

Between beasthood and Godhead groping in a dream

The rage of the tiger is taken for granted

-quote from Malcochon one act by Derek Walcott

On television he had recurring roles on episodic drama, Law & Order, situation comedy, Sanford & Son and soap opera, Days of Our Lives. Among his screen credits were Malcolm X, The Muppets (with Negro Ensemble Company puppeteer Brad Brewer of Crowtations fame), Clockers and played Mr. Wrightson in Take Manhattan. His distinctive voice can be heard in many voiceovers and commercials.

“A theater evolving not out of negative need, but positive potential; better equipped to employ existing talents and spur the development of future ones.  A theaate whse jutification is not the gap it fills, but the achievment it aspire toward — no less high than any other camparable theater company of present or past world fame.”

The NEC boasts a competitve theater in New York’s downtown Theatre District and a rigorous training  or Black Actors in mask work,  voice production, acting, directing, writing, theatre adinistration, karate, musical techniques, which set a high standard for NEC works that jolted the confines of what was possible in world theatre from a Black point of view.

” A theatre concentrating primarily on themes of Negro life, but also resilient enough to incorporate and intepret the best of world drama — whatever the source.  A theatre of permanence, continuity and consistency, providing the necessary home-base for the Negro artist to lanch a campaign to win his ignored brothers and sisters as constant witness to his endeavors…so might the Negro, a most potential agent of vitality, infuse life into the moribund corpus od American theater.”

Graham Brown (October 24, 1924 – December 13, 2011) was celebrated as one of the best actors to transform The Negro Ensemble Company stage. As an award-winning American actor he is celebrated for his work in the theatre and television.[1]

Born Robert Brown in New York, New York, . Graham Brown was an original member of The Negro Ensemble Company (NEC) and played in many NEC productions like: Malcochon by Derek Walcott, Ceremonies in Dark Old Men by Lonnie Elder III, District Line and The River Niger both by Joseph A Walker.

Mr. Brown brought his enhiusiasm for the art of acting to the original cast of the controversial play Song of the Lusitanian Bogey by Peter Weiss,  which toured Europe and was subject to riots in a London theatre in August 1968.

Phillip Meister of The National Shakespeare Company Conservatory often said that the highest compliment an audience could give actors was to get up and walk out ( I imagine he admired The NEC for it’s ability to challenge and passionately engage it’s audiences, who, in 1964, were seeing themselves often for the first time in complex roles on the stage.

Graham Brown, honored cameleon and joyous pioneer of the American Stage and Black Theatre, was revered for his virtuosity, immaculate sense of style and ability to play many different roles with flawless precision and mastery in plays spanding many periods.  His humility, professional integrity and team spirit made him a joy to work with and an inspiration.  Numbered among other greats like, Frances Foster, William Jay, Arthur French and Rosalind Cash, Graham Brown’s persornal  elegance and clear diction  often encouraged  directors to cast him in professional, highly educated, opulent or wise roles.  He also played opposite actors like Rosalind Cash, Hattie Winston, Ruben Santiago-Hudson, Samuel L. Jackson, Helmar Augustus Cooper, Clarice Taylor and The NEC founder, director, actor, writer, Douglas Turner Ward.

One of his best remembered roles was as “Jared Philibert,” the 50-year-old patriarch of a Caribbean-American family in Steve Carter’s critically acclaimed play, Nevis Mountain Dew. He originated the role in NEC’s Off-Broadway production and reprised the role in the West Coast premiere of the play. For the latter he received a Los Angeles Drama Critics Circle Award for his performance.[2] 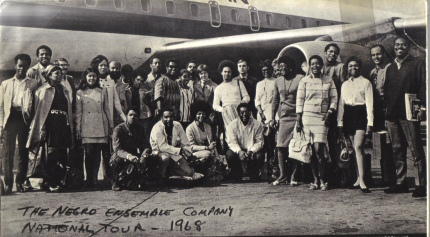